Today, Memorial Day 2010, I went to a service by myself for the first time.  For many years Mom & Dad went to the local Grove Hill Cemetery, where the the local VFW always sponsors a service, and I have gone a few times with them.  For whatever reason neither went today, so I went alone.  The weather was perfect, it didn’t rain, and I saw END_OF_DOCUMENT_TOKEN_TO_BE_REPLACED

Andrew McCarthy of NRO points out something very important in this article: the brazen polemical attack on the state of Arizona by the president of Mexico last week represents something more than partisan politics.  Since it was fully supported by Pres. Hussein, and thunderously applauded by the Democrats, it is clear that the very fabric of who we are as a country is under attack.  Should we reward persistent, unrepentant END_OF_DOCUMENT_TOKEN_TO_BE_REPLACED

War has changed since Dad flew a Navy PB-4Y over the Pacific.  Then, although the radio operator sometimes had contact with a base, you were still largely on your own.  Now, in Afghanistan and other hotspots, there is a narrative scroll.

In WW2, more than any other war, soldiers and seaman just END_OF_DOCUMENT_TOKEN_TO_BE_REPLACED

A terrible earthquake, apparently building up pressure over hundreds of years, has practically destroyed the capital city of Haiti.  Over 200,000 people, some having died in agony after hours under the rubble, have been dumped in mass graves because there simply wasn’t time to bury them properly.  Many more are terribly injured or suffering from the deepest poverty, because they have nothing left, and they are in line with thousands of others who have nothing left.  But… as my daughter recently commented, this just doesn’t seem fair.  Haiti always seems to get the short end of the stick; they have been in poverty for centuries, and are END_OF_DOCUMENT_TOKEN_TO_BE_REPLACED

Big Fix?  A renowned environmental consultant says the Intergovernmental Panel on Climate Change has been cooking the 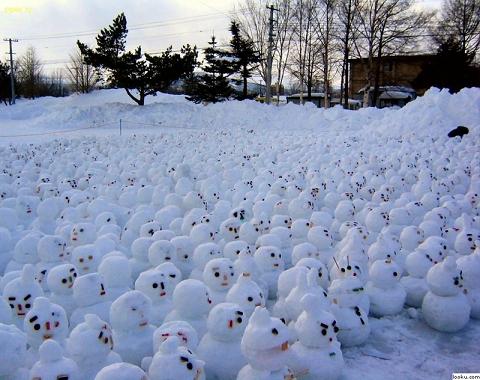 books on global warming. Former University of Winnipeg Climatology Professor Dr. Tim Ball writes in the Canada Free Press, “The only place where CO2 is causing temperature increase is in the IPCC computer models.”

He says the IPCC has a habit of releasing computer model summaries before climate studies are even completed. He says by doing this, “The summary gets maximum media attention and becomes the public understanding of what the scientists said… they create an appearance of certainty about a human cause of [global] warming.”

Adding, “The computer models themselves are completely inadequate to represent global climate… but don’t believe me. The IPCC technical report released in 2007, says so.”

Finally, as if to drive home the point, my buddy Bob in Cincinnati sent this picture of a global warming protest attended by hundreds of … snowmen!

Caution–New York is the only state that prohibits the transportation of handguns without a license. Travelers should therefore be particularly careful since they face severe consequences should they inadvertently violate the state’s highly restrictive statutes.

On June 26 [2008], the Supreme Court ruled in District of Columbia v. Heller that the Second Amendment”A well regulated Militia, being necessary to the security of a free State, the right of the people to keep and bear Arms, shall not be infringed” protects a purely individual right, as do the First, Fourth and Ninth Amendments. “Nowhere else in the Constitution does a ‘right’ attributed to ‘the people’ refer to anything other than an individual right,” the court said. “The term [‘the people’] unambiguously refers to all members of the political community.”

On Sept. 8th, while traveling home from a building seminar in NY state, I got a first hand look at how law enforcement in a “gun unfriendly” location interprets my right (see above) to individually carry a weapon as a means of protecting myself and my wife.  Although I was not actually arrested, I was effectively taken prisoner END_OF_DOCUMENT_TOKEN_TO_BE_REPLACED

The coming election will be about the economy, we are told, and we roll our eyes and ponder that thought as the price of gasoline begins to approach the price of gold (or so it seems). Global warming tax hikes, summer gas tax rollbacks, economic woes, housing foreclosures, even starving horses all over the west (because their owners can no longer afford to feed them)– it’s the economy, everybody!

Read this article. Yes, I know, you are END_OF_DOCUMENT_TOKEN_TO_BE_REPLACED

Over the summer Lydia will be updating her own blog; you can read about all her adventures at Lydia-China.10thGen.org. If and when we get photos and news, we will do some cross-posting here as well. For those of you who might be wondering, she will actually be in China for the start of the Olympic Games, but will not see them herself.

We miss you already, Lydia! 🙂

What happens when you give a bunch of kids in the kitchen some broccoli, Playdoh and brightly colored paint?  How about … sea slugs!  In this image by David Doubilet, you have to ask your self what exactly you’re looking at.  Is that branchie looking thing in the back a tail, or lungs?  Actually, kids aren’t likely to create anything this beautiful, and neither is Lady Random Chance, in my view.  To see these guys in all their glory, along with lots of their friends, check out this National Geographic gallery.

In a few weeks the latest “Indiana Jones” movie will open at theaters. One of my memories of that series is the big, round boulders that keep careening out of some passageway at the hero, along with his nick-of-time escapes from being crushed. But how about boulders the size of the kitchen table, or your car, coming at you in real life?! Our cousin, John Graham, was in south central China the afternoon of the 7.9 earthquake, and he has an amazing story to tell: END_OF_DOCUMENT_TOKEN_TO_BE_REPLACED