Due to not-so-gentle proddings by a certain family member, I’m finally going to post about William Roscoe Hartman, II, affectionately known as Will.  I was present for his birth on Dec. 19th, which was a great privilege.  The birth story and pictures are in our January, 2010 newsletter.  If anyone reads this who didn’t get one, let me know.

Ted and I returned to GA last weekend, both to celebrate Sarah’s birthday with her, and for Ted to set up a virtual office so Sarah can do some work for eTG.  I persuaded him to drive down on Thursday night instead of Friday.  That would give him an extra day to complete his projects (including building a doghouse for Huckleberry, who was also celebrating his birthday), and also insure that we didn’t have to drive through the bad weather predicted for Friday.  That was just as well.  Last year, we extricated ourselves from the historic ice storm in KY to go surprise Sarah on her birthday.  This year, the ice storm found us on Lookout Mountain, GA!  It came Friday and Friday night, with a little snow continuing to fall on Saturday.  The power went out about 10 pm Saturday night, just allowing us to get through making Sarah a cake, having a b.d. dinner, opening presents, and cleaning up the dishes.  We finished out the evening with candles before seeking the warmth of our comforters in sleep.

We awoke Sun. morn to a very cold house.  Thanks to neighboring church members with a gas log fireplace who took us in, we were able to spend a relatively warm Sunday, and Sarah could nurse in warmth!  After the church service at 2 pm (due to the weather), we returned there.  They fed us both lunch and supper, and we contributed the rest of Rainey’s delicious chicken soup from Sat. night.  We had rest, companionship, and some good games of Blokus!  Lucy, tell Debbie that this is a great game for 4 people (or less), if she’s interested in another new game.  The power still wasn’t on by  Sunday evening, so Rainey called another church family who runs a bed and breakfast.  They took us in at no charge, and even fed us a wonderful breakfast Monday morning before we left.  What a blessing!

But this post is supposed to be about Will….  He was the center of attention, of course, not only because he is cute, but also because he is 6 weeks old and he demands it: feeding, burping, diaper changing, and plenty of small attentions as he deals with gas and fussiness while he is supposed to be sleeping.  He reminds me a lot of Sarah as a baby — who had trouble sleeping or staying asleep.  She spent a lot of time on my chest in a snuggli, where I could jiggle her around with one hand, or pat her on the back to ease her through gas pains.  My function, while Ted worked on setting up the office and consulting with Sarah and Rainey, was to rock and pacify Will, and clean up the kitchen (over and over.  Eating repeats itself, you know.)  So without further ado, here are a few pictures of Will in his brief times of satisfied wakefulness.  He’s up into the 9 lb category, from 6 1/2 lbs. 6 weeks ago. 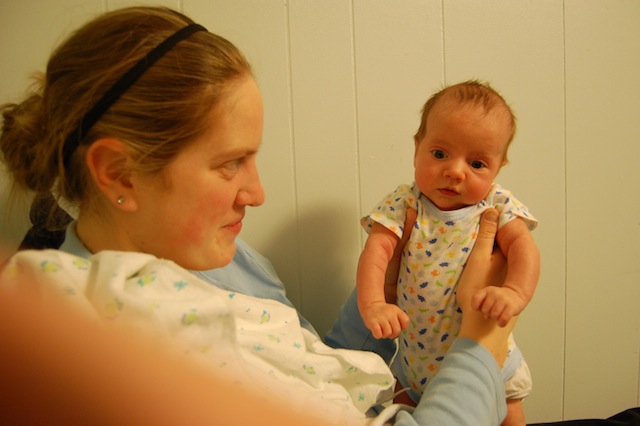 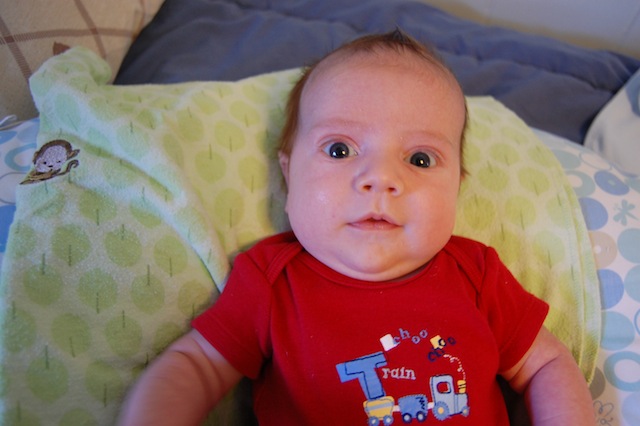 Finally, I caught a smile.  His mommy used to smile just like that, with one eye open wider than the other. 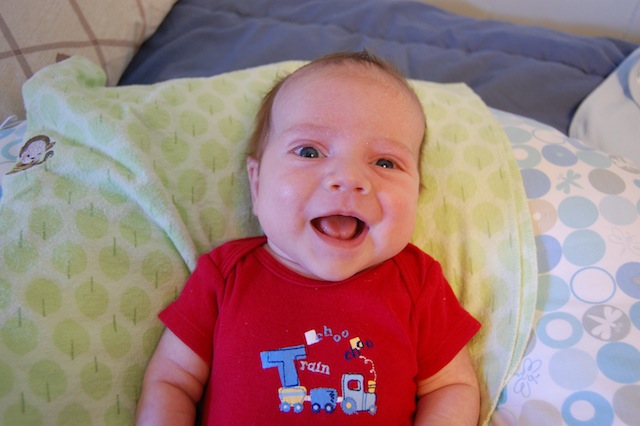 This is my very favorite.  Sarah is giving him “tummy time” to encourage him to lift his head and develop arm muscles.  He doesn’t much like it.  Will would rather be upright.

One Reply to “Enjoying the next generation”