On Saturday, April 4, at 1:30 in the afternoon, 13 guests gathered at our home to experience Serena’s class project for “Tea Room 101”.  This is a half-credit class which has included 5 sessions with Debra Richardson, the proprietor of The Yellow Carriage House Bed and Breakfast (who also conducts periodic teas), and work assisting her with teas in December.  Although Serena has put on at least 5 high teas before, this was the first on which she was to be graded, and therefore Mom kept her own help to a minimum.  Serena had her friend Caitlin come to help with last minute preparations and serving during the tea.  I was the official hostess — getting to greet guests, sit at the table and enjoy scrumptious treats, and leave all the cleanup to Serena and Caitlin.  I like this kind of entertaining! END_OF_DOCUMENT_TOKEN_TO_BE_REPLACED

In the midst of Iceland, we had been making surreptitious plans with Rainey (Sarah’s husband), to come down and surprise her for her birthday.  The ice threw a kink into those plans.  Serena volunteered to stay home to look after things, since she had to work Friday, anyway.  But we weren’t comfortable leaving her when it involved kerosene heaters and generators.  Enter our wonderful cousin, John Graham, who lives in Shelbyville.  He agreed to come out and be with Serena during the nights, and help her oversee the mechanical devices that were powering and heating the house.  His wife, Ann, took Serena to work Friday, after Serena hiked down to the end of the avenue.  (By then, we’d had a few more inches of snow over the ice to make the driveway even more treacherous.)  More on that in a minute. END_OF_DOCUMENT_TOKEN_TO_BE_REPLACED

Sorry about the delay, I’ve been filming a movie. Really. My Chinese class is making a short movie for the Asian Festival next Saturday, and we were filming most of today, from about 10 am -3pm. And then yesterday, I spent 13 hours at END_OF_DOCUMENT_TOKEN_TO_BE_REPLACED

Lydia has had a very busy week (as you will see), so she asked me to post this for her:

Wow, sooo, I have two weeks to catch up on don’t I? We’ll I’ll try to hit the highlights. So two weeks ago, I was formally initiated into the Mirrors Sophomore Class Honorary, an honorary that I had applied for in February and had done an interview for as well. Every year a group of 40 students are selected by the current Mirrors members to be the next ‘generation’ I specifically wanted to get into this honorary because their main service project is volunteering for the St. James Cancer Hospital. I want to get involved in service to cancer patients since my grandmother on my mother’s side died of cancer.

Last Wednesday I received a letter of congratulations from the East Asian Studies Center at OSU. I had won END_OF_DOCUMENT_TOKEN_TO_BE_REPLACED 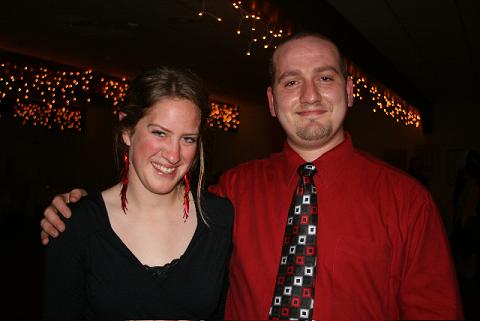 Actually, it should be “RPC Ball”, since friends of Sarah’s gave ballroom dancing lessons for weeks, and it was held by the church. Here’s Sarah and her new guy, Rainey. Looks like they had fun!

After a violent storm last week (no power for 2 days, trees down, 7 barns gone) it’s been great to have some good weather and to enjoy some flowers on the special day for love- Feb. 14th. Beth and I celebrated with some friends from church at Porcini’s last night. It was very good food (shrimp for me), great conversation and loads of laughs as 3 new couples were gathered up front for the “Cathy Mitchell version” of the Newlywed game. For those of you who attended, you know what I’m talking about 🙂 For the rest, imagine trying to guess your spouse’s answer to some trivial question about your honeymoon while everyone else (who already know the answer) stare at you, grinning from ear to ear.

Apparently, Beth & I have managed to avoid the spotlight for these annual events, so Cathy has sworn to get us up there next year. <note to self: begin planning west coast business trip for next Feb….> We’ll see!

Now, for the curious among you, who have noticed a word in the title END_OF_DOCUMENT_TOKEN_TO_BE_REPLACED

Wow, it has been an amazing week. I am very glad we started back school on a Thursday and just had two days of school before the weekend, because I don’t think I was ready to just jump back into school for a whole week.

I had a wonderful holiday, thank you, and I hope you did too. My family was here (meaning home in KY) from California, Colorado, and England, and we had a wonderful Christmas week. We ate out almost every night! I am surprised, or rather not suprised, at how tiring eating out can get when you do it all the time. If it was just me I wouldn’t of done it, but the point of eating out was to fellowship with each other, so it was worth it.

New Years Eve some members of my church hosted a END_OF_DOCUMENT_TOKEN_TO_BE_REPLACED

I hope you all had a wonderful thanksgiving. I am thinking about whether or not to write during Christmas break, and I think I will at least twice, since break is all of December. I have one final left, Arabic, which is at 7:30 AM on Monday morning. This, contrary to some expectations, is not early for me, since I usually get up at 6:30 anyway. It is a problem, however, for many of my classmates, who are used to sleeping till 10 am, or getting up to go to a class and then going back to sleep again. After my final I’ll be done with school and homeward bound.

This being the last week of classes, a lot of parties and various celebrations went on. Thursday night I END_OF_DOCUMENT_TOKEN_TO_BE_REPLACED

Relax y’all. It was just Lydia and Serena’s joint costume birthday party. All the kids had great fun planning and preparing their costumes, if my 2 girls are any indication of the rest. Most arrived in a carpool from church about 5:30 on Friday. After much recording of everybody’s character and name, and picture taking, there was folk dancing, and other games, a yummy dinner (courtesy of me), costume prizes, present opening, cake (of course), and a game of sardines in the darkness of selected rooms in the house. Then more games that I didn’t observe, before the guys left at midnight. Most of the girls stayed the night. You know how these things work: watch several videos, eat popcorn, and finally go to sleep at 4 or 5 in the morning. Ted and I went to bed after the guys left! I also slept late, since I knew the girls would. By the time folks were up and had their pancake breakfast, it was almost time for parents to be picking them up. A good time was had by all. And in spite of the appearance of some of the participants in costume, their behavior was impeccable, and activities wholesome.

After studying the following pictures, I have concluded that we had quite a collection of weapons and other interesting accessories at our party. I counted 3 pairs of elf ears, 2 bow and arrow sets, 6 swords, 5 knives, 3 pistols, 1 horn, 1 shield, and 2 eye patches. Here are the participants and the winners of the costume contest. (Sorry Ronny, you got here too late and missed the pictures). Who would you vote for?