In the midst of Iceland, we had been making surreptitious plans with Rainey (Sarah’s husband), to come down and surprise her for her birthday.  The ice threw a kink into those plans.  Serena volunteered to stay home to look after things, since she had to work Friday, anyway.  But we weren’t comfortable leaving her when it involved kerosene heaters and generators.  Enter our wonderful cousin, John Graham, who lives in Shelbyville.  He agreed to come out and be with Serena during the nights, and help her oversee the mechanical devices that were powering and heating the house.  His wife, Ann, took Serena to work Friday, after Serena hiked down to the end of the avenue.  (By then, we’d had a few more inches of snow over the ice to make the driveway even more treacherous.)  More on that in a minute.

After thinking through the whole weekend, making sure Serena was provided for, and packing. . . we were finally ready to leave.  We even left 15 minutes before we had figured we had to be gone in order to make it to Sarah’s party on time.  We made it almost halfway down the driveway before sliding off the road!  (Let me make it very clear here that TED was driving).  Do what he might with the 4 wheels driving, there was no getting back up on the drive, only deeper in the ice and snow.  However, the good part of living on a farm is that there was a tractor back in the shed that Ted could use to pull out his jeep.  He trekked up to get the tractor, and I trekked back up to the house to stay warm.

You Thomases will appreciate that cousin Bebe was there to check on her horses, and came to help Ted get the tractor started (thinking it would need to be jumped).  In the process, she got her truck stuck, too.  Ted got the tractor started and helped Bebe pull her truck out, then she helped him pull the jeep out — at least 20 minutes of working together without an uncivil word!  Only those acquainted with our family politics will appreciate what an extraordinary event this was.

An hour later that our original departure, we departed again.  The main roads were pretty much clear, or we would have canceled our trip.  We went into town to pick up Ted’s van, and left the jeep at John’s house for him to use in going back and forth to our house.

The trip itself was uneventful.  Before we reached Corbin on I-75 south, the ground was clear!  We made it by the middle of Sarah’s party.  She was not really surprised, since several things had hinted to her that we were coming.  (Which was a good thing, she said, so part of the house was clean!)  We spent a nice, relatively warm, and completely snow and ice-free weekend with Sarah and Rainey.  We even had running water!  And could take showers!  It was a nice change before returning to an only partially-thawed KY on Sunday night.  Here’s a picture of Sarah with one of her presents, which she won’t actually get to come and live with her for a few months. 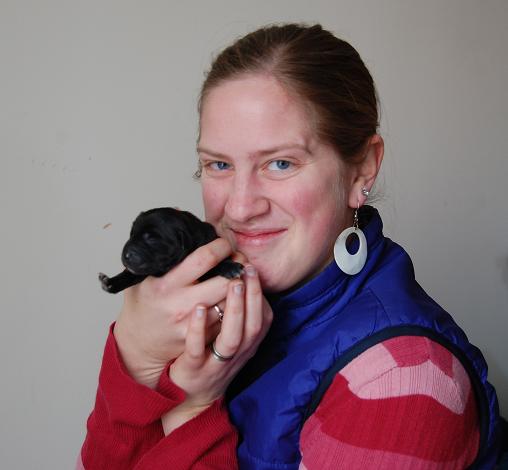 One Reply to “The surprise that almost wasn’t”