This year has been busy happening, and my posts haven’t, so I’m going to try to catch up today.  The biggest recent happening (and the coldest, most destructive and pestiferous) was the now famous ice storm that swept over 6 states — KY being about in the middle.  I’ve never seen anything like it in my life.  Oh, we’ve had sleet.  It left a beautiful icing on the trees for the sun to set asparkle, and maybe resulted in a lot of small twigs falling to the ground.   We had one of those late in 2004.

Raise that kind of storm several exponential powers! We had some light snow on Monday, 1/26.  On Tuesday evening, the sleet began.  I stayed up late that night reading.  When Ted went to bed, I moved from our room into Lydia’s room so I wouldn’t disturb him with the light.  Limbs started falling between 11 and 12.  And sure enough, just before midnight, the power went out.  I continued reading by flashlight for a little while, just to see if it would come back on.  Vain hope!  So then I awakened Ted so he could shut down his computers and servers.

That was the eeriest night I’d spent in a long time.  All through the night, our sleep was disturbed by loud “cr-a-a-c-k”s, followed by various degrees of crashing as whatever limb that had cracked came crashing down.  Many limbs broke completely, but some were still attached to the tree by a few shreds, or peeled down a long strip of bark as they separated.  We did hear a few thumps on the roof, but nothing significant fell there, thanks to the major trimming Ted did in August of large limbs overhanging the house.

Morning light on Wed., 1/28, revealed a world encased in ice.  Thick ice.  Heavy ice.  Dangerously slippery ice.  The yard looked like a war zone.  On the ground below each tree was a circle of broken branches.  When we finally got out, it became clear that our whole area looked that way.  A major branch that was one whole side of a maple tree behind our house had fallen on the driveway, precisely where Ted’s new business van was parked the day before.  But it wasn’t parked there Tues. night, because we had just taken it to the mechanic to have the heat checked out.  We really thanked the Lord for that! 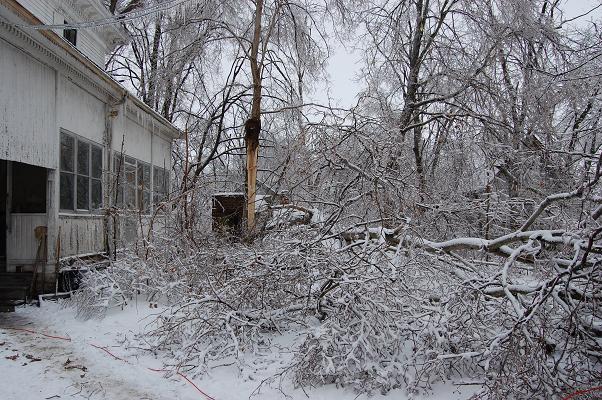 So there we were, in good company with millions of other people:  without power, heat, and in our case, water.  The weather stayed below freezing, way below freezing, most of the rest of the week until the weekend.  We cranked up the low-emission kerosene heater that we had borrowed from one of our elders when our furnace was out at Thanksgiving.  None of our or the farm’s generators (3) would work.  So we borrowed a generator from the same elder, and he brought it out Wed. night.  That allowed us to get the furnace on, and run a few lights, a laptop, a small microwave, and a hot pot to boil water. 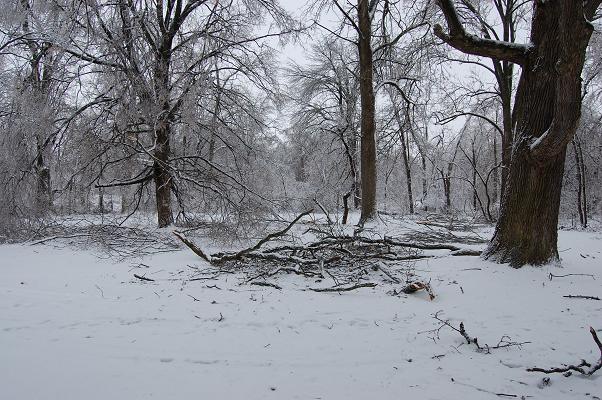 We were able to get in and out of our 1/2 mile avenue in Ted’s 4 wheel drive jeep, so I could get Serena to work at the kennel.  This was mandatory, since the owners were out of town (in Jamaica, no less!  They picked a great time to go!)  We brought Emily (Ted’s mom) over on Thursday to thaw out.  Their power was back on by late afternoon on Thursday.  Our’s wasn’t restored until the next Tuesday — 6 days out.  That maple tree limb that fell behind the house took down the service from the box to the house, not something that the utility company is responsible for.  Wire and electricians were both in very short supply, so Ted had to do a temporary fix until we can  get a whole new wire strung when things calm down again.  Oh, and we got water back a week after the sleet.  Our cistern and pump is a 1/2 mile away from the house.  When the electricity finally came back that serviced the pump, Ted then had to go down and check out the pump before we could turn things back on.

So that was our January weather adventure.  The cleanup will take a long, long time.  This past year has been very hard on our trees.  First a tornado, then Hurricane Ike, then Ice.  Hopefully, the snapped-off ends of branches will be camouflaged when the leaves come out.  Here’s one more picture of the heavily burdened trees. 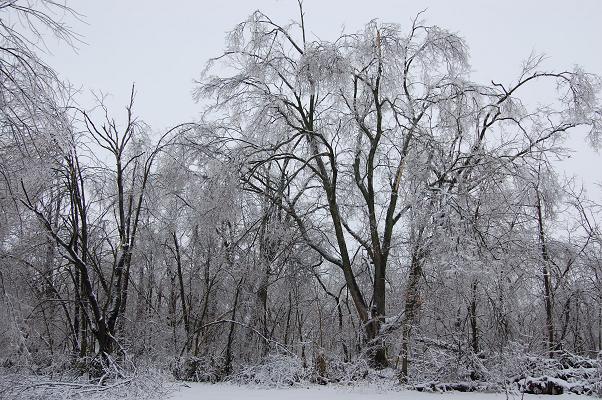