Upon returning from picking up Serena at work early Friday morning (she is temporarily caring for the dogs at the kennel in the morn, too), Ted noticed an unusual, brown lump in the road near our driveway. He went back to investigate, after turning into our drive, and returned to deposit the said brown lump in Serena’s lap. It was a screech owl! It had evidently flown into a car, and had the good fortune to land in the center of the lane such that car tires straddled it as they passed. It did not have the good fortune to be uninjured from the crash, however. Ted and Serena rigged up a perch for it in a critter cage we had. It sat on the perch in a dazed but quiet condition all the while it was at our house. It would look at us out of its left eye, but kept the right eye closed.

Saturday, we were going in to Louisville anyway, and were able to make contact with Raptor Rehab. of KY, which is based there. The director informed us that this is “hit-by-car screech owl season”! It happens every year, because they are more active, presumably courting. There were 6 cages lined up in the back already, containing hit screech owls. Unfortunately, the volunteers weren’t encouraging about our owl’s prospects, due to the blood in its throat, the damaged eye, and the bloody stool it had while at our house (internal injuries). At least it will be in the care of folks who know what to do for it.

Here’s the poor little fellow, in our cage, and at the rehab. center. 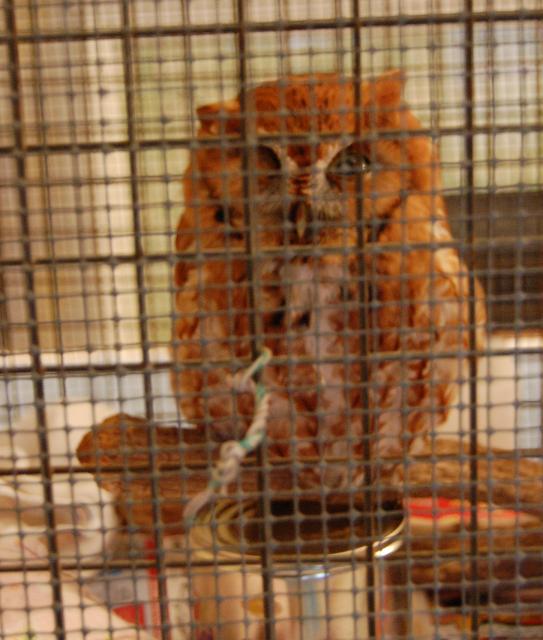 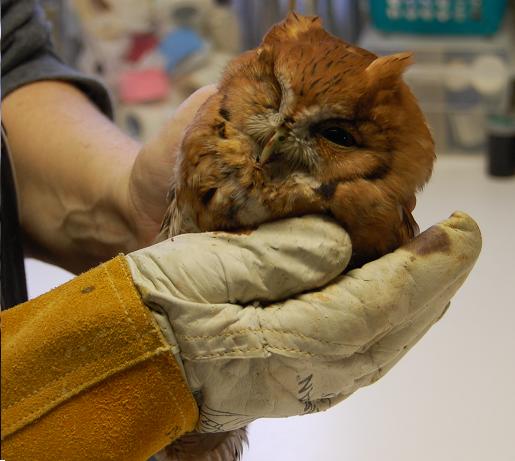 And here’s your tidbit for the day: In Raptor Rehab’s newsletter that they gave us, one of the articles was about barn owls. Did you know that they are nicknamed “the flying mousetrap,” and that they can catch more mice in a night than 10 cats??? Imagine!