In the ancient Middle East, Arabic scholars could often be seen, head wrapped in a turban, bent over their low study tables with scrolls and manuscripts spread about. Behind full beards and bushy eyebrows, they would scowl or squint as they pondered the flowing script on the pages before them. Quill pen in hand and ink nearby, they would respond to a colleague or write a sermon in the same flowing script, all the while unaware of the intense scowl or pursed lips which might be seen by a discrete observer. 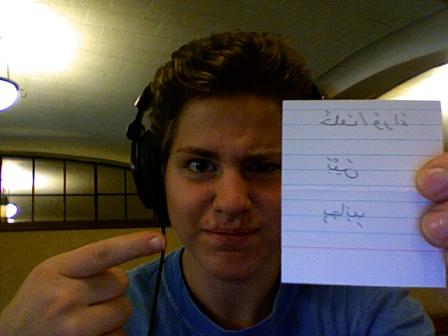 These days, Arabic scholars take a more direct approach. As one can see here, headphones are the new turban, and the beard is optional. However, scowling is the norm, especially when the scholars are serious and a tad bit annoyed. This particular scholar must be pondering a technical point, perhaps an esoteric reference or obscure construction, resulting in a peculiar intensity of gaze and clarity of effect.

Of course, this might also be a sign to go on the bathroom mirror which reads, “Do laundry on Tuesday!” I never enjoyed doing laundry, either, so I can relate.  Actually, it might read, “Dad, if you post this picture on the blog, I’m going to …”

One Reply to “Arabic can be annoying…”