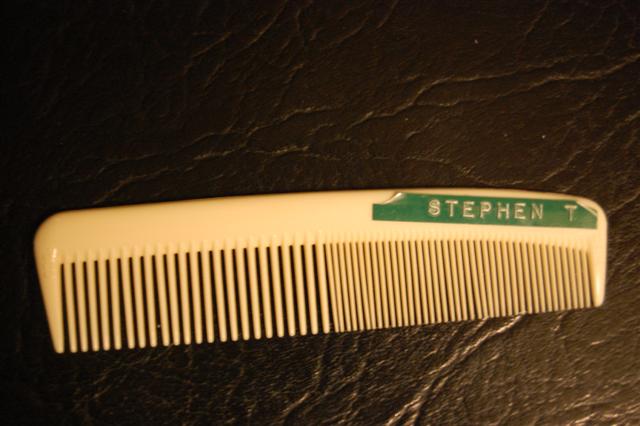 Today is the 50th birthday of someone I know, love and have come to admire over the years.  However, it wasn’t always that way.  This was brought home to me last night, as I was about to walk up the stairs at my parents home.  “Here, Ted– do you recognize this?”  said Mom.  Actually I didn’t, until I saw the name.  Memories, memories… I probably never saw this comb years ago, because I had left home before the owner really cared that much about hair (translate: girls).  Frankly, at the time, he was a different person than he is today.  Briefly, here’s the story:

We’re in a parking lot near downtown Louisville.  I am a middle teen, as I recall, soon to leave for boarding school (or perhaps I had already gone, and was back for vacation).  My mother, seething in the front seat, with a look of dark anger (and despair, as I later came to realize), had just said something shocking about her 2nd son.  Basically, it was, “… I never want to see him again.”  I was taken aback; I had not realized the depth of her problem, or the pain it was causing until that day.  She was clearly at her wit’s end.  Rebellious, headstrong, smart, independent and absolutely determined to have his own way was the best description of the owner of this comb.  Deep down, there was something else going on as well, but I could not see or understand it at the time.  We all knew our family was in serious trouble, but no one seemed to know what to do about it.

Fast forward to a few days before Stephen left for a boarding school in Va.  Through the generosity of a relative, he would finish his education at an elite boy’s school with high standards, and firm discipline.  This scared him, I think.  Suddenly we were opening up to each other, and I think we ended up praying together– which we had never done before.  On that day I began to see a glimmer of hope.

The years past.  On the outside, the teenager blossomed into a tall, dark, handsome and seemingly “bound for success” young man.  He was a leader, and the girls could not help but notice him.  There were rough spots, but he made it through.  Good jobs, marriage, 3 attractive & gifted children and untimately a job as a regional VP for the largest medical recruiting firm in the US came his way.  Stephen had it made … not.  Without going into painful detail, a number of things were also falling apart.  All this time I too was changing, as I matured in character & faith.  I never stopped praying for Stephen, but actually reaching him on the inside did not yet seem possible.  Finally, after a major crisis or two, something changed.  My brother began to do at least two things right which he had not done before:  he got deadly serious about following Jesus Christ as his Lord, and he found men he became accountable to.  From that point on, amazing things began to happen.

In the last decade or so, the rebel has disappeared.  Sometimes age alone with do that, yet there are many ways to rebel, and all kinds of things to rebel against.  In Stephen’s case, rebellion has been and is being replaced with a heart for the Lord, and a commitment to doing the right thing, no matter what the cost.  Assuredly perfection has not been reached– there are still areas where the edges are rough.  Nevertheless, I am so proud of this brother of mine, as he begins his fifth decade, because the scene from that parking lot long ago has been completely reversed.  Stephen is the VP and owner of a successful recruiting firm; he is the father of a talented entrepreneur in his own right, a budding international marketing executive and a top water polo player; he is a faithful member and friend to many other men at his church, and he is now a joy to his parents.  Most of all, he is a man of God I respect and admire.

Bravo, my brother!  Have a great day, and may you find many more decades of challenge, opportunity and growth.  I still pray for you, as I know you do for me.  We are proud of you.  May all who know you follow the good in the example you set.