UPDATE below the fold… 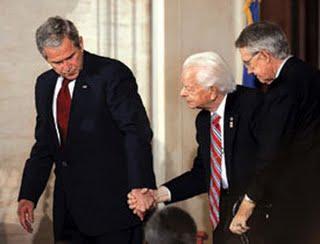 Notice anything?  How ’bout this: there are 6 men in these two pictures, and 5 of them are millionaires, or close to it.  The sixth is a cop.  Guess why he’s in the picture with 5 millionaires?  For more, and credits on the pictures, read this.

One of the six men also said this, “… anyone making less than $250,000 a year ‘will not see their taxes increase by a single dime’ if he was elected.”  According to the Wall Street Journal, “… he was right, very strictly speaking: Its going to be many, many, many billions of dimes.”