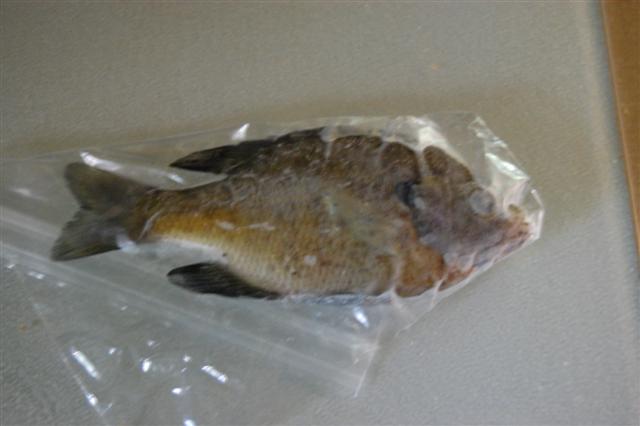 You see, it all started when I decided to write our Bible Nature Camp curriculum for this year, using the theme of cold-blooded vertebrates (reptiles, amphibians, and fish).  I’ve been working on it since January, and thinking about it since before that.  For the last month, I’ve been eating and sleeping cold-blooded vertebrates, it seems.  Eating, literally, as I tried out all the snacks so I could confirm recipes and write them up.  I had a stegasaurus sandwich, snakes-in-the-dust, sticky tongue cookie, and tuna turtles.  I also tried out all the crafts, making sure they worked, and figuring out the best way to do them.  (It was fun!)  But forgive me, I’m getting off the subject.  We were discussing fish.  Most definitely fish.

When I’m in the curriculum-writing mode, I’m constantly on the lookout for anything that relates.  Several weeks before VBS (Vacation Bible School — same event as Bible Nature camp, just the usual name), I realized I had to stop by a pet store to find a bubbler to put in the tank with the bullfrog tadpoles I had ordered.  They didn’t seem to be thriving, so I thought some extra oxygen might help.  At the time, I was driving back to Middletown from the St. Matthews area.  The only place I could think of to stop was Feeder’s Supply in Middletown.  Enter Fish #1.

As soon as I walked into the store, I saw him:  huge and orange, he hung merrily from the ceiling, announcing the location of the aquarium supplies.  It was a giant, stuffed clownfish which immediately precipitated this thought, “Wow! what a great decoration for VBS!”  After a nice staff member helped me find what I needed, I asked about the possibility of loaning the fish to us for a week.  She got the manager for me.  As I started to explain my request, she immediately began to give negative feedback, citing the sensitivity of fish to change…….obviously she thought I was asking to borrow a real fish!  “No, no,” I said, pointing above her head, “I mean THAT fish.”

“Oh, THAT fish,” she replied.  “You can HAVE that!”  Turns out it had been given to them by a customer whose daughter had won it at the fair.  She didn’t know what to do with it besides hang it up, but, she explained, “It’s a tropical fish, and we don’t even SELL tropical fish!”  She was glad to get rid of it!  So I walked out of the store with a bubbler, and a free, 3-foot-long, orange, stuffed clownfish that looked like Nemo on growth hormones.  It was the kind of unexpected, providential gift that put a big smile into my day.  And it DID make a great VBS decoration, hanging from the ceiling over the craft area.

Three days later, a black man knocked on our door.  He was a relative of folks who used to live on our farm, and was asking to go fishing in the lake.  “Sure, that’s fine,”  I said.  “Oh, BY  THE  WAY, I need a dead fish to use in VBS, to show the kids the external characteristics of a fish.  Would you be so kind as to bring me a little fish if you catch an extra one?”  Some 5 or 6 hours later, Ted found fish #2 — a dead fish — laid on our doorstep.  He brought it into the kitchen.  “Do you have any idea why there is a dead fish on our doorstep?,” he asked.  (Now, really, why would he be asking ME?)  What would your typical housewife do when confronted with a dead fish?  She would probably say “ewww” and hold her nose.  Guess what I did.  I jumped up and down and clapped, saying “Oh boy, oh boy, I have my fish for VBS!”  I was right to be excited, too!  The fish was a big hit with the kids, who got to touch it, feel the scales and fins, and look into the gills and mouth.  (I had kept it in the freezer in the interim, so no, it wasn’t rotting or smelly, except for the usual fish smell).

For anyone who cares, VBS was a great success.  It was this past week (7/27-31), which is why I haven’t posted before.  We even had the KY Reptile Zoo to come on Tuesday, bringing 6 reptiles to show and talk about.  One of the other ladies in the church helped me to dress sort of like Ms. Frizzle of The Magic Schoolbus fame.  I had a different smock for each day, except Tuesday, serpent day, when I wore a green t-shirt with a giant stuffed boa wrapped around me.  Since I don’t have a picture of giant Nemo, I’ll swallow my reserve and include a picture of me taken on amphibian day.  And I’ll throw in a few others for good measure.

I’ve had my “do crazy things to educate little kids” fix for the year.  Now I can get back to a normal, sane life.  Children, do you believe me??? 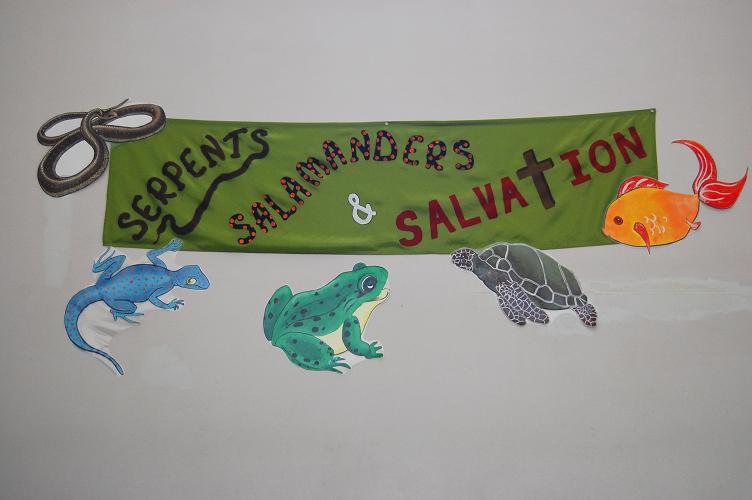 The children watching the reptiles.  In this case, a timber rattler. 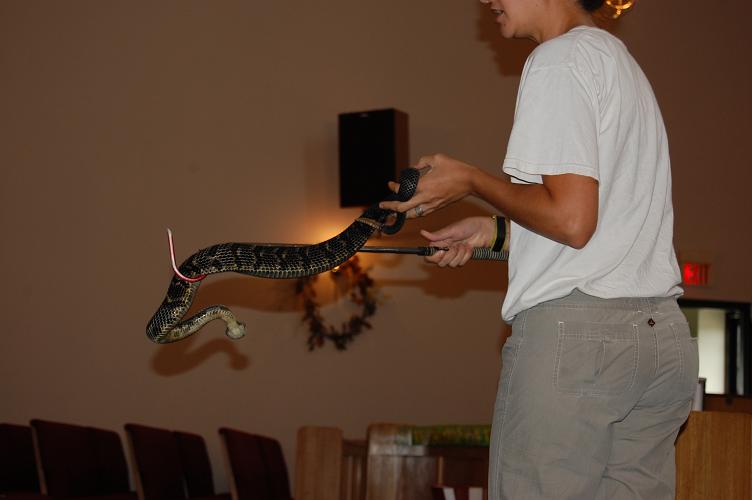 The snack queen and her crew assemble sticky tongue cookies. 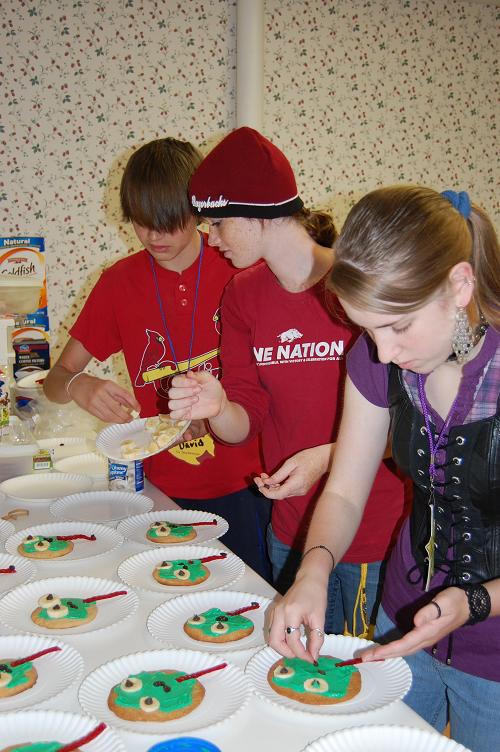 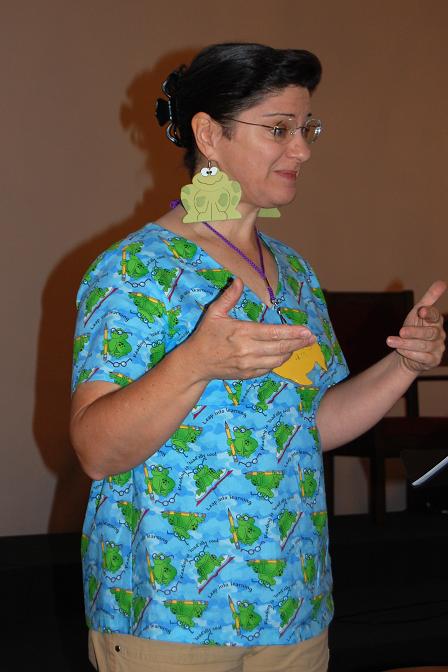 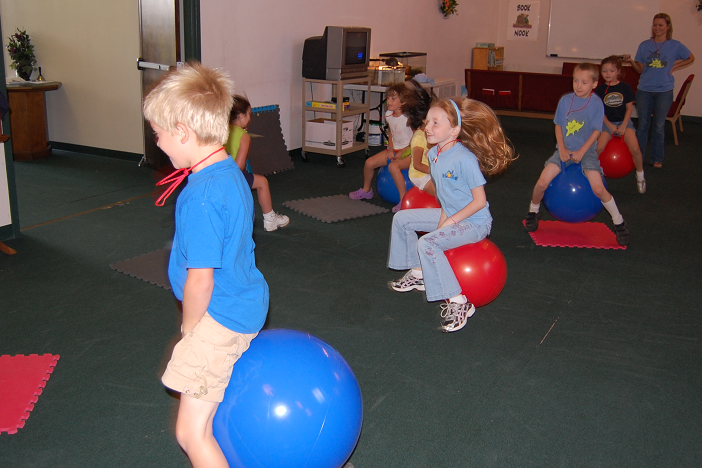 One Reply to “Never look a gift fish in the mouth”