Serena’s art is going to the dogs….in a manner of speaking.  Her art tutor had her playing around with different shades of red and red-brown on brown paper, as a break from oil painting (in which she is doing extremely well, by the way).  Serena chose a picture of a dog’s head to experiment on.  Her tutor was so pleased with it that she took it and Serena next door to McKinley’s Restaurant.  The owners have a german shepherd named Wilson.  They just happened to have a photo of him.  The result was an assignment to reproduce Wilson’s head with this technique, for which said tutor was to pay Serena, then give it as a present to Wilson’s owner.  Serena agonized a bit before getting started, but finally plunged in.

I went in with Serena to her next lesson so I could see Mrs. Powell’s (tutor) reaction to the finished product.  Her eyes got wide……she gave a gasp of delight, then proceeded to gush over Serena’s work.  (Keep in mind that she is a one-person Serena fan club!)  To put this in perspective, however, let’s consider the reaction of Wilson’s owner, for Mrs. Powell insisted that we go right next door and make a presentation to her (the owner).  Her reaction was a little quieter, but more intense — the same dropped jaw and small gasp, with the addition of a bit of teary eyes.  She kept saying, “Oh, I just want to hug it!”  The colors of the drawing aren’t accurate, and aren’t intended to be, but Serena really captured Wilson’s expression, and the intelligence in his eyes.  Oh, you want to see it?  It just so happens that I took a picture of it before we left home.  Here it is. 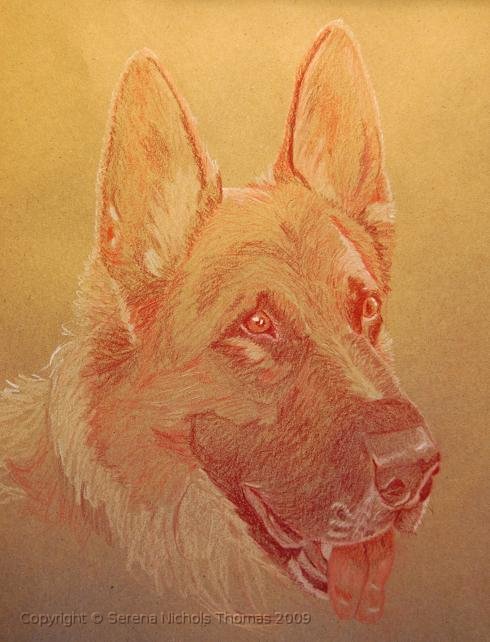 She was ready to pay on the spot, and couldn’t believe it was a gift.  But the agreement is that she will frame it and hang it in a high traffic spot in the restaurant.  Serena will make a card to go under it, advertising “commissioned pet portraits”.  When we returned to the studio, Mrs. Powell wrote a check to Serena for $20 — her first earnings as an artist.  It was a good morning for Serena!  We’ll see where this goes.

One Reply to “Artist in Residence”