Subtitle: “How spoiled cats fit into the scheme of things”

Recently, as some of you know, my family left for various parts known and unknown (see post below), and the LifeForms and I were left to our own devices for most of about 10 days. Many things happened in that time (I discovered how many LifeForms we actually have, for instance…) and generally, things clicked right along. Upon their return, the queen of the house (her daughter actually brought it up first) said:

“Did you spoil the cat?” 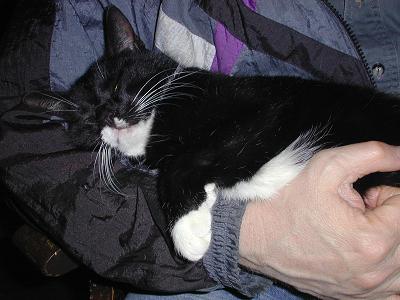 It seems, don’t you see, that there has been some disagreement among us regarding topics such as the diet of said cat (milk or no milk), the reliability of veterinary advice we have been getting (cats can’t digest milk- then what have they been doing with it for thousands of years??) and the feline girth (“that cat is fat and lazy!”). Of course, I was non-plussed, since many important events and circumstances had arisen and been dealt with during their long journey, and many important decisions had yet to be made, and … what cat? Ahem! In any case, regarding the spoilation of the royal feline, I have discovered, decided (and am announcing here) that:

The occasional spoiled cat never hurt anybody, now did it? Honestly. What world event would have been different, what civilization is being ruined, what chasm of blackness in world history would be opened up by … feline spoilation?

Besides, all this is minor league. A man does have to keep in shape, flex his muscles, and exercise the brain cells for when the objects of his major league spoilation show up in a few years. And who might those objects be :-)?