As many have feared, Iran continues to stonewall the west on it’s nuclear program, and Israel continues to prepare for a preemptive strike to stop it.  Clearly, a nuclear Iran is a “life or death” question for their national existence, since only one nuclear detonation anywhere in Israel will cause half the population to flee the country, and the government’s tax base will collapse.  On top of that, Israelis have very little confidence in BHO’s commitment to them and their safety, having watched his administration’s un-serious and pathetic response to the Christmas Pantybomber.  Meanwhile, the EU cowers before their own increasingly radical Islamic population, and Russia and China find Iran’s nuclear ambitions to be both convenient and helpful.  Beneath and behind all the turmoil and upheaval, our Lord is doing something amazing– over a million Muslims have come to Christ!

I was captivated by the stolen Iranian elections last summer, especially after seeing the Neda execution video.  I began to pray and look for ways to support the movement, including setting up a Tor proxy on one of my own computers (until it was shut down due to the strong objections- for technical reasons- of our ISP ).  In recent days, I have been even more strongly impressed to pray for God’s people in Iran, because the govt. has apparently lost the ability to frighten protesters in the streets.  In fact, in this article, a former high-level official in the Iranian govt. predicts that it will collapse soon.  (Some suggest he is a double agent, and can’t be trusted, but others counsel to wait and see…)  All of this has the feel of “history being made”, yet only the Lord knows the final outcome.  Although I have read the reviews several times, I have not yet read the Joel Rosenburg book (linked below) about the Iranian revival; it’s coming up on my list.  For more information about what you can do, please read the rest of this page.

UPDATES BELOW THE FOLD…

As we write, this is not our reality.  Instead, it is coming true in every major city in the Islamic Republic of Iran. 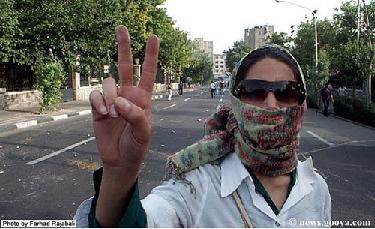 In the last several weeks, over Twitter, YouTube and other sites on the net, millions of messages and videos have poured out of Iran.  Almost without exception, they show ordinary people demanding, at great personal cost, that the leaders of Iran obey their own laws.  Mir Hossein Mousavi, their unlikely leader, has publically committed to martyrdom (and may be imprisoned or dead by now) rather than give up the fight for a free and fair election.  At his call, millions have marched, thousands have bled and many have died for the simple opportunity to be free.  As we write, up to 10,000 are under arrest, and the infamous Evin prison is no doubt overflowing; many will never see their families again.  As the Iranian state continues to crack down on the foreign press and spread disinformation, Twitter (another unlikely player) has become the lifeline of the resistance.  Although the Iranian state is blocking many sites outside Iran, thousands of ordinary people everywhere have set up their own proxy relays to help defeat the censorship, and the videos and messages keep coming out.  Apparently, the mullahs of Iran had not counted on the power of technology to make information flow– they cannot stop it now. 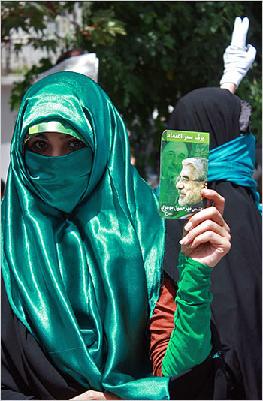 Why should we care?

Hossein Mousavi was a revolutionary who helped overthrow the Shah, and was responsible for the death of many in the years that followed.   He, and many who follow him, are committed Muslims who do believe that Allah will triumph as they gradually subject all the world to the rule of Islam, either by conversion or by force.  Quite possibly he hates Israel (our most trustworthy democratic ally in the Middle East) and would attack it if he could.  Nevertheless, he represents Iranian longing for freedom from tyranny and the rule of law instead of the personal whim of an unelected mullah.  Though it is not clear what he would want in the long run, it is clear that he will die for those who want greater freedom in Iran.  Finally, Iran is committed to acquiring nuclear weapons, including something called an EMP.  Just one of these, exploded over the midwestern US, could destroy our entire power infrastructure, and plunge our society into darkness and chaos (for years, if not decades).  It is the case that democracies do not attack other democracies; America will be safer- the world will be safer- if and when Iran becomes one.  Is this an impossible dream?  Perhaps– but tens of thousands of old women, young boys, poor farmers and wealthy intellectuals are joining hands on the streets of Tehran with a great hope and steel will to make it happen.  In only a week, they have (so far) taken everything a cruel dictatorship can throw at them, and they are still there.  [Woman in green photo copyright The New York Times]

In his book  Inside the Revolution, author Joel Rosenberg claims that millions of Iranians have come to Christ, and that there is a great revival happening night & day in the Muslim world.  With the death and destruction happening right now in Tehran and other Iranian cities, this is our greatest reason to care, and to pray.  The harvest is white; it is ready to come in at the very doorsteps of our sworn enemies.  Will we help them?  Will we even pray for them???

What can we do?

For those of you who have asked for more information and ideas for what you can do, here are some links:

Since the beginning I have been following Austin Heap in San Francisco, who was one of the first to set up proxies to allow Iranians to bypass the IRGs firewalls and filters.  Now he and others are building Haystack, which punches a permanent hole in the Islamic Republic’s efforts to imprison their people in a military dictatorship (complete with scads of oil and nuclear technology, BTW).  You can follow the news there, and donate to support the frontline servers.  I am also involved with the Tor Project, which allows people in dangerous environments to surf and communicate safely.

On Friday, July 17th, the former president of Iran gave a sermon in Tehran which essentially supported the revolt in their desire for political freedom of speech, the right to assemble and the right to select their own president.  This was somewhat of a surprise, and no one clearly understands whether the current supreme leader, Khamenei, actually approved the speech.  Meanwhile, a large beta test of the Haystack network is ongoing, and initial reports show that the Iranian govt. cannot block it.  There is also a rumor that a serious nuclear accident occurred in Natanz soon after the disputed election in June.

According to this Wall Street Journal article, lots of people have something in a desk drawer that can help the Iranian resistance– a USB thumb drive.  If it works and is at least 128mb big, it will be loaded with the Haystack client software and smuggled into Iran.  This will provide safe and anonymous net access for Iranians who believe their presidential election was stolen, and who want to see the rule of law (Iran has a constitution) instead of the whim of religious dictators.  To find out details and the mailing address, click here.