So Lydia says, “The ROTC Color Parade in the OSU stadium is no big deal.”  (We had gotten an invitation as her parents.)  “Maybe you should come next year when I have been in the NROTC program for awhile…”  This was about a week before May 15th, the day of the parade.  By Tues. we heard from somewhere that she might be getting a few awards; by Thur. Lydia called again, sort of wistfully, and announced that she would be getting more than two awards, and could we think about coming??

Bragging Alert!  You might have guessed it was coming; in a mostly vain effort at discretion, the major part of our wanton bragging is below the fold… you’ve been warned!!

Fortunately, we did go, it was a beautiful day, and we sat at the end of the HUGE stadium, 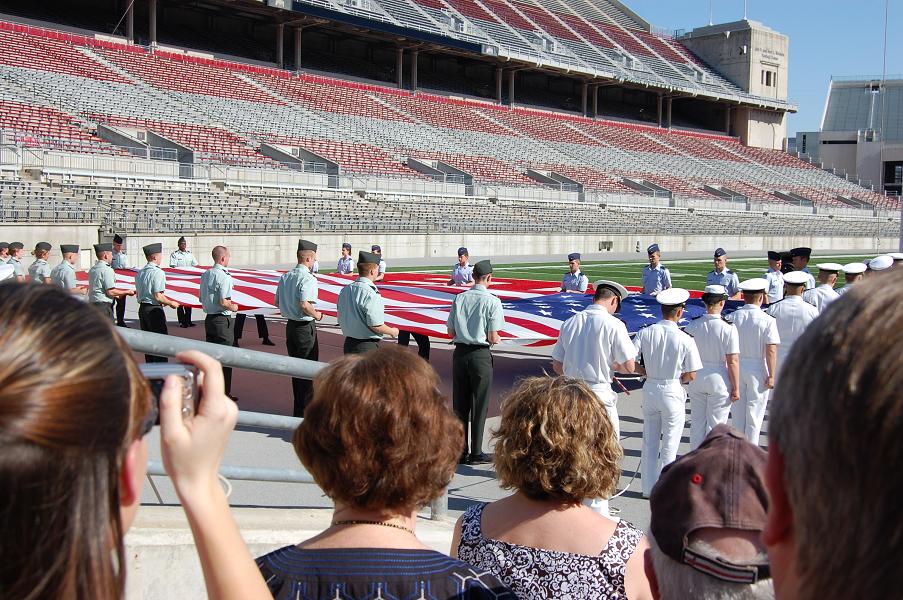 where we watched what seemed like fifty ROTC students raise and lower a 50 lb, enormous American flag. END_OF_DOCUMENT_TOKEN_TO_BE_REPLACED

On Saturday, April 4, at 1:30 in the afternoon, 13 guests gathered at our home to experience Serena’s class project for “Tea Room 101”.  This is a half-credit class which has included 5 sessions with Debra Richardson, the proprietor of The Yellow Carriage House Bed and Breakfast (who also conducts periodic teas), and work assisting her with teas in December.  Although Serena has put on at least 5 high teas before, this was the first on which she was to be graded, and therefore Mom kept her own help to a minimum.  Serena had her friend Caitlin come to help with last minute preparations and serving during the tea.  I was the official hostess — getting to greet guests, sit at the table and enjoy scrumptious treats, and leave all the cleanup to Serena and Caitlin.  I like this kind of entertaining! END_OF_DOCUMENT_TOKEN_TO_BE_REPLACED

We FELT like archeologists, and we certainly did a lot of unearthing as Lydia, Serena, and I spent most of the day Monday turning Ben Allen and Emily’s cluttered mudroom into a usable space once more.  I didn’t think to take any “before” pictures, but you family members know what it was like — barely room to walk through it to the garage.  END_OF_DOCUMENT_TOKEN_TO_BE_REPLACED

“Take time to stop and smell the roses,” to me means to pay attention to and enjoy the little, everyday things of life. So here are a few of those that have happened in the past weeks, for you to enjoy, and for our family to remember. END_OF_DOCUMENT_TOKEN_TO_BE_REPLACED

Our daughter Lydia has been gone on several rugby trips recently, and hasn’t had time to post her latest missives. Here are two of them. First, however, some of my grandmother’s beautiful flowers, which are the part of her legacy to us which is renewed each spring: 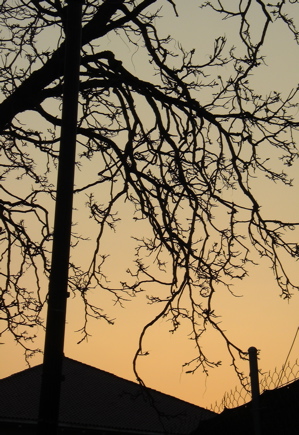 Here’s some pictures from around campus. I am very glad I came to OSU, among other reasons, because of how beautiful it is in the spring. These first three pictures are 1) a picture of the sunrise from my window, I’m looking across the courtyard of my dorm complex and seeing the sun peak over part of the dorm building. 2) the sunset beside the main library, which is currently being renovated. 3) the oval (big green open space in the center of osu campus) around noon-time, full of students catching some sunshine and relaxing. The rest are self explanatory. Enjoy! END_OF_DOCUMENT_TOKEN_TO_BE_REPLACED

This week I had a wonderful conversation over dinner with a friend of mine, named Hongmei, who is native to Qingdao, China. I met her through IFI; she is a respiratory doctor in China and is at OSU as a visiting scholar doing research. She is not a Christian, but is interested and impressed with Christianity which is why she has been attending the potlucks on Friday nights. We got together at the cafe in the RPAC and had dinner and talked about ourselves and about Qingdao. She is very nice and has said she would love to have me visit her family while I’m in Qingdao, and she wants to take me around and show me the sights!

I had my first Math midterm this week and, END_OF_DOCUMENT_TOKEN_TO_BE_REPLACED

Relax y’all. It was just Lydia and Serena’s joint costume birthday party. All the kids had great fun planning and preparing their costumes, if my 2 girls are any indication of the rest. Most arrived in a carpool from church about 5:30 on Friday. After much recording of everybody’s character and name, and picture taking, there was folk dancing, and other games, a yummy dinner (courtesy of me), costume prizes, present opening, cake (of course), and a game of sardines in the darkness of selected rooms in the house. Then more games that I didn’t observe, before the guys left at midnight. Most of the girls stayed the night. You know how these things work: watch several videos, eat popcorn, and finally go to sleep at 4 or 5 in the morning. Ted and I went to bed after the guys left! I also slept late, since I knew the girls would. By the time folks were up and had their pancake breakfast, it was almost time for parents to be picking them up. A good time was had by all. And in spite of the appearance of some of the participants in costume, their behavior was impeccable, and activities wholesome.

After studying the following pictures, I have concluded that we had quite a collection of weapons and other interesting accessories at our party. I counted 3 pairs of elf ears, 2 bow and arrow sets, 6 swords, 5 knives, 3 pistols, 1 horn, 1 shield, and 2 eye patches. Here are the participants and the winners of the costume contest. (Sorry Ronny, you got here too late and missed the pictures). Who would you vote for?

END_OF_DOCUMENT_TOKEN_TO_BE_REPLACED

On Thursday evening, April 5th, Sarah arrived from Covenant…at church…in the middle of our Maundy Thursday meal and service…with a puppy…who immediately became the center of attention for the few moments before Sarah took him outside to find a place to tie him up. Said puppy was Serena’s birthday present. Serena took one look at him and named him Copper.

We’ve been used to Ginny’s Border Collie/Australian Shepherd, high-energy behavior. Copper is her perfect foil — loafy, floppy, and loving to just sit on your lap. Ginny rarely barks; Copper does. (I think there is definitely some hound in him, to judge from his bark). Ginny jumps up on you in her enthusiasm; Copper gets in front of your legs to make you stop and pet him, and almost trips you! Sarah says he is a lab mix. I say he is hound mixed with St. Bernard. Look at those paws! He’s going to be ENORMOUS!

In spite of his size, though, Copper is a big marshmallow — so soft and floppy and huggable!

The first night, he growled at Ginny, so Serena let him spend the night in the back vestibule to recuperate from his stressful day of travel and new surroundings. At 6 the next morn, we were awakened by mournful barks and yowls (the hound-dog type). So, he spent the first day or 2 inside the dog pen, getting acquainted with Ginny through the fence. They were fine playing together through the fence, or when Copper had his back to something. When out in the yard, however, Ginny would race around with excitement, and come back to bowl Copper over like Hobbes does to Calvin in the comic strip. Pretty soon, Copper began to hold his own, though. At the end of a week, Ginny is calmer, and they play together quite well. My yard is starting to suffer from Copper’s digging, and he is quite interested in the chickens and the peacocks. Lots of training is in order! Here’s a photo of Copper and Ginny getting acquainted. 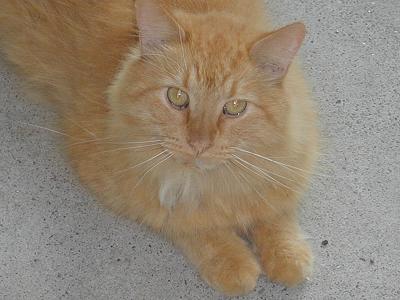