No, really!  Well…I put something in his ear and set THAT on fire.

It’s called an ear candle, and it’s an ancient method to draw excess wax out of the ears.  The ancient Egyptians used them, believe it or not.  We recently heard about them from somebody at church, who swore to their effectiveness.  So I bought some to try on Ted, who has long had trouble with wax buildup in his ears.  And they DID work, wonderfully!  They worked so well that I also administered the same treatment to Ben Allen (father-in-law), who has an even worse problem than Ted.

The burning candle sets up a chimney effect, which draws the warmed and softened wax up into the base of the cone.  This was much more effective than any of the ear-drop remedies we had ever tried.  Aside from the open flame, about which I was very watchful and careful,  it is simple and effective.  Ted even went to sleep!

In case you’re wondering, we found the ear candles at Rainbow Blossom.  Look at your nearest health food store.

This is not a “don’t try this at home” scenario, but it is definitely a “don’t do this alone” procedure!  The flame must be watched, and the candle trimmed several times as the flame burns down. 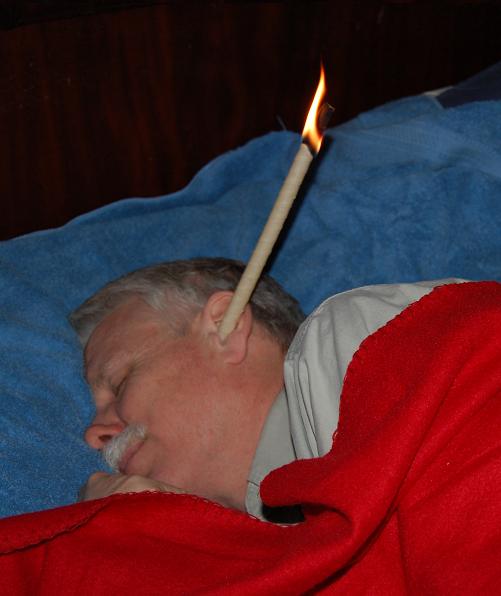 One Reply to “I set my husband on fire, mwah-ha-ha-ha-ha!”