In recent years I have become wary of a certain situation. Whenever I find myself admonishing someone to be careful of some sin or situation, a little voice mumbles something in my head. Has this ever happened to you? The voice is mumbling “… your turn next?” Sometimes this happens before my words to the other person are even out of my mouth. “There but for the grace of God, go I” said John Bradford, and I believe it wholeheartedly.

The Governor of New York apparently did not. As the Attorney General, he actually admonished those considering a secret tryst with prostitutes to be wary of emails, phones calls and the like, because he would wiretap them into jail. As Client #9, however, he seems to have forgotten his own advice. He will probably not be governor next week, and many will be hurt by his fall.

The Wall Street editors have it right, I believe. Stabbing his wife in the back with a whore was only the beginning; his lust for unrestrained power was the greatest crime. May the Lord bring good out of this sordid mess, and may I learn the lesson the likely former governor has paid so dearly to bring me.

Power most surely does corrupt, and the grace of God is what I must have to use it wisely. 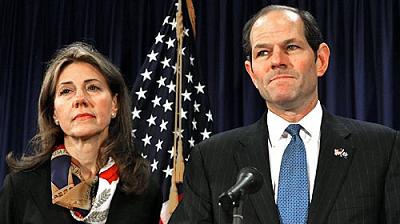 I have to say that the saddest thing about this picture is the expression on Mrs. Spitzer’s face. He looks like the proverbial “boy standing by the principle’s office door”, but her expression is one of resignation, pain and thoughts about the difficult life she must now navigate through. Apparently he was doing this while Attorney General– at least a call girl told ABC News he was a nice customer then. It also appears he used the Emperor’s Club numerous times. Did his wife know about this? After all, a famous Democratic politician comes to mind here, although WJC appears to be the master at this process, whereas Spitzer was the amateur.

Many are saying, “Why do we waste time on the sex lives of politicians?” Indeed. Why do we have laws in the first place? Perhaps some of you might leave a comment to lay out why the despicable hypocrisy of men in high office might be a problem for a just society…

UPDATE TWO: What will Ashley do?

Ashley Dupre, the former child gymnast and “…naturally just a sweet, sweet person“, is a whore. At least, that is the technical term for the vocational choice she has made. Now Penthouse Magazine (which I will not link to!) has offered her millions for more skin, with others close at their heals. For those who have read the book of Genesis, this situation will sound familiar. Long ago a beautiful child queen was made a very attractive offer. All she had to do was some mysterious thing called “death”, and she would be transported to a whole new realm of power and knowledge. She did, and she was … but with that power and knowledge came sadness, toil and suffering. The serpent turned out to be not quite as trustworthy as he seemed, and the young girl had the crushing experience of watching the bright, new world she had once been queen of gradually sink and die under the weight of the curse it now bore. Her dreams truly turned to ashes…

There was another whore. Tormented by demons and despised by men, she had no future and little hope. She did have two friends, however, named Mary and Martha. Through them she had an amazing encounter; you can read about it in Luke 7:36-50. Later, when the 2nd Adam had crushed the serpent’s head and emerged triumphant over death, He revealed Himself first to Mary Magdelene, the woman of sin whom He had washed clean. Our God, it seems, has a special love for whores– not to use them, but to redeem and love and give them new life.

Join me in saying a prayer for Ashley, that she would be found and saved by the Whore Redeemer.