Well, I’m two and a half days away from being halfway done with the college quarter. It definitely seems weird. It is cliche to say “how the time has flown by”, or “it seems just like yesterday” so I’ll just say that each day has seemed to last forever, but when stacked in the past, makes but a small pile of time gone by. I believe that it has more to do with the fact that it is easier to remember the last thing that was really different, which would be leaving home, as opposed to remembering all the individual days that have all been the same and have blended together for the past four weeks. So it seems like being at home was just yesterday, but only because I can remember it more clearly than the individual days of three weeks ago, which seemed just like the days of last week.

I really like writing hanzi, it is just like drawing. It is pretty easy to memorize them too, I just connect the picture with a meaning that relates to the meaning of the hanzi. For instance, the hanzi for qian, or money, is made up of the radicals for “metal” and “spear”. So I just think, you need metal to make money, and spears to fight to keep it, so I remember how to write the hanzi. By the way, the Chinese rarely make much distinction between singular and plural unless they are being very specific about something, so character is hanzi, and characters is hanzi too. The written test was very easy for me and I got 100 percent. Remember, this also has to do with the fact that I studied hard. I can’t just look at a hanzi once and remember it forever, I do have to work at it. I just figure I have to work at it a little less than some other people. And it’s fun. Lots of fun.

I must be pretty good at writing them too, because after one of our classes I was asking an instructor about the finer points of a particular hanzi and several other Chinese professors saw my notebook and the characters I had been writing and they were all very impressed. I find the hanzi very easy to write, so I suspect that everyone else can write them well too, it is just that I happened to be the one who’s notebook the other instructors saw in passing. And of course, remember that this is not calligraphy. This is just regular pencil writing for everyday use. The art of calligraphy is a very precise and difficult art to learn. And it is an art, it is not really writing at all.

In other news, I met some people practicing Tai Chi in the park on saturday and when they were finished I talked to them a little. The instructor is Chinese and I got to speak some Chinese with him. Only a very little mind you, but then he got a phone call and I got to listen to his conversation in Chinese. I could understand some of it. It had something to do with breakfast and meeting someone later (I think, don’t quote me on that). So that was pretty cool. They come to the park every Saturday, so hopefully I’ll get to talk more with them.

Jerah, my housemate, the daughter of Mr. Pettibone who owns the house, had her eye operation on Wednesday and it went very well. Thank you all for praying for her. Now she just has to heal, and slow and frustrating process, since she can’t do much while she can’t see very well out of that eye.

I have a little prayer request that may seem a bit laughable, but please pray all the same. Next Saturday the 7th Harry Potter book comes out. I will not be reading it till I get home in August. So I won’t get to read it till around a month after it comes out. This is going to be very hard and distracting for me. With everybody around me talking about it, especially the week leading up to it and the week after it. Please just pray that God would help me stay focused on school and not be distracted by thinking about or wanting to read the 7th Harry Potter book.

For those who have not read any harry potter books, you are probably wondering what my problem is, but for those who have been waiting for it to come out as long and eagerly as I have, I hope you are feeling sorry for me about now. My hope is that I can just forget about it between now and when I get home (fat chance, but I’ll try). Please, don’t anybody mention it to me, not till I get home and can read it.

Thank you all, I hope everything is going well for you wherever you are. Keep trusting in the Lord, he is taking care of me and he will take care of you too. 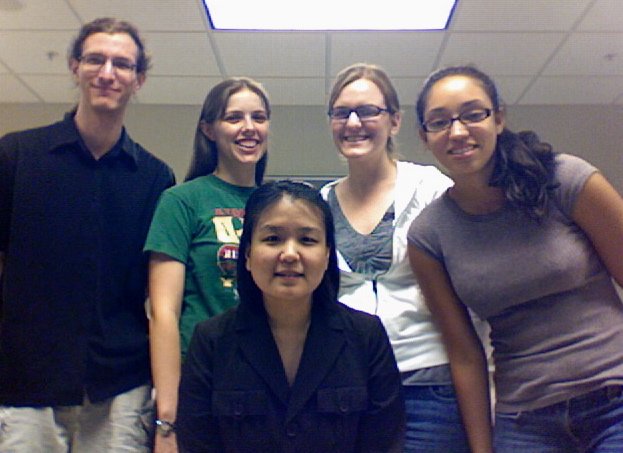 P.S. This is a picture of my classmates as you all requested. People standing up, from left to right: Pan Wen ran (Michael), You shao wen (Amanda), Kong An he (Analese), and Peng Cheng (Amanda). The person crouching in the front is one of our instructors, Jiang Loashi. She is actually Korean, but majored in Chinese in Korea and than came to America to teach.